← more from
Bar/None Records
Get fresh music recommendations delivered to your inbox every Friday. 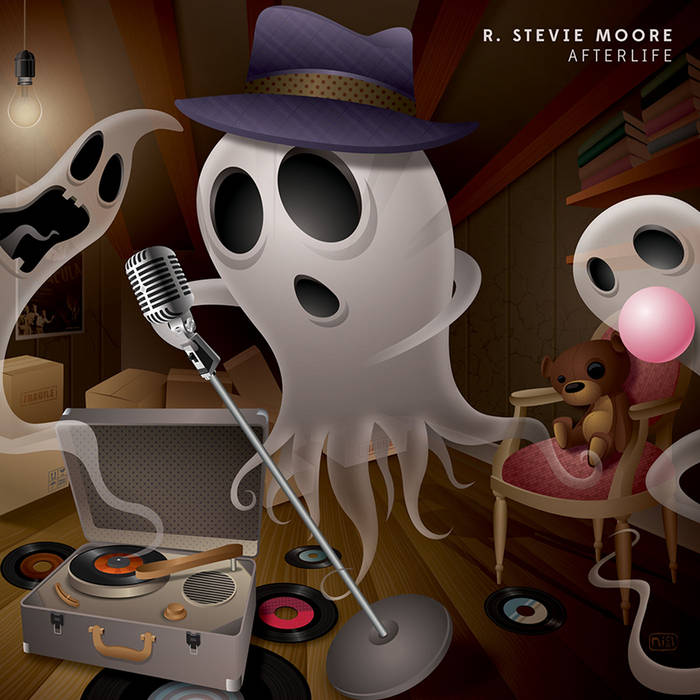 mykullmelton It's got a really finely selected group of songs, and very fine recordings of them, in a really nice order.

When R. Stevie Moore achieved underground notoriety in the 1970s, he was hailed as a do-it-yourself pioneer. DIY was a rogue subgenre of independent music in which artists assert maximum control over the creative process. Writing music and lyrics, playing all parts in overdubbed layers, engineering, mixing, mail room—Moore was a one-man music factory. Despite occasional collaborators and sidemen, he was too self-centric to be a team player. The outcome was (and remains) critical acclaim, but limited commercial splash. Not for lack of effort on the part of Mr. Moore.

His output slowed with age, but he continues recording because that's his raison d'etre. Afterlife consists of top-tier post-2000 recordings—eleven from 2010-2013. Some of the songs are four decades old; others were written relatively recently. The vintage songs were originally recorded at home in the 1970s and '80s, often on chronically malfunctioning open-reel decks with low-grade 1/4-inch tape. They were great tunes, transcending the lo-fi muck, and they begged to be revisited with state-of-the-art clarity. Afterlife is a survey of some of R. Stevie's best pop tunes, covering a lifetime of songwriting. From an audio standpoint, there might not be a better-recorded RSM collection, and every song is an idiosyncratic pop gem. For RSM, perhaps there's life after obscurity.


Special thanks to Harry Palmer and Jeroen van der Schaaf